skip to main | skip to sidebar

A cool and drizzly night at the Astros Spring Training ballpark in Kissimmee.Carlos Pena hit a two run HR in the first inning off Dillon Gee. I think Gee's struggles continue this spring. There are better writers out there to describe the rest of the game. Look at metsblog.com The only other highlight I will mention is the triple by Matt Dan Dekker. Love triples. 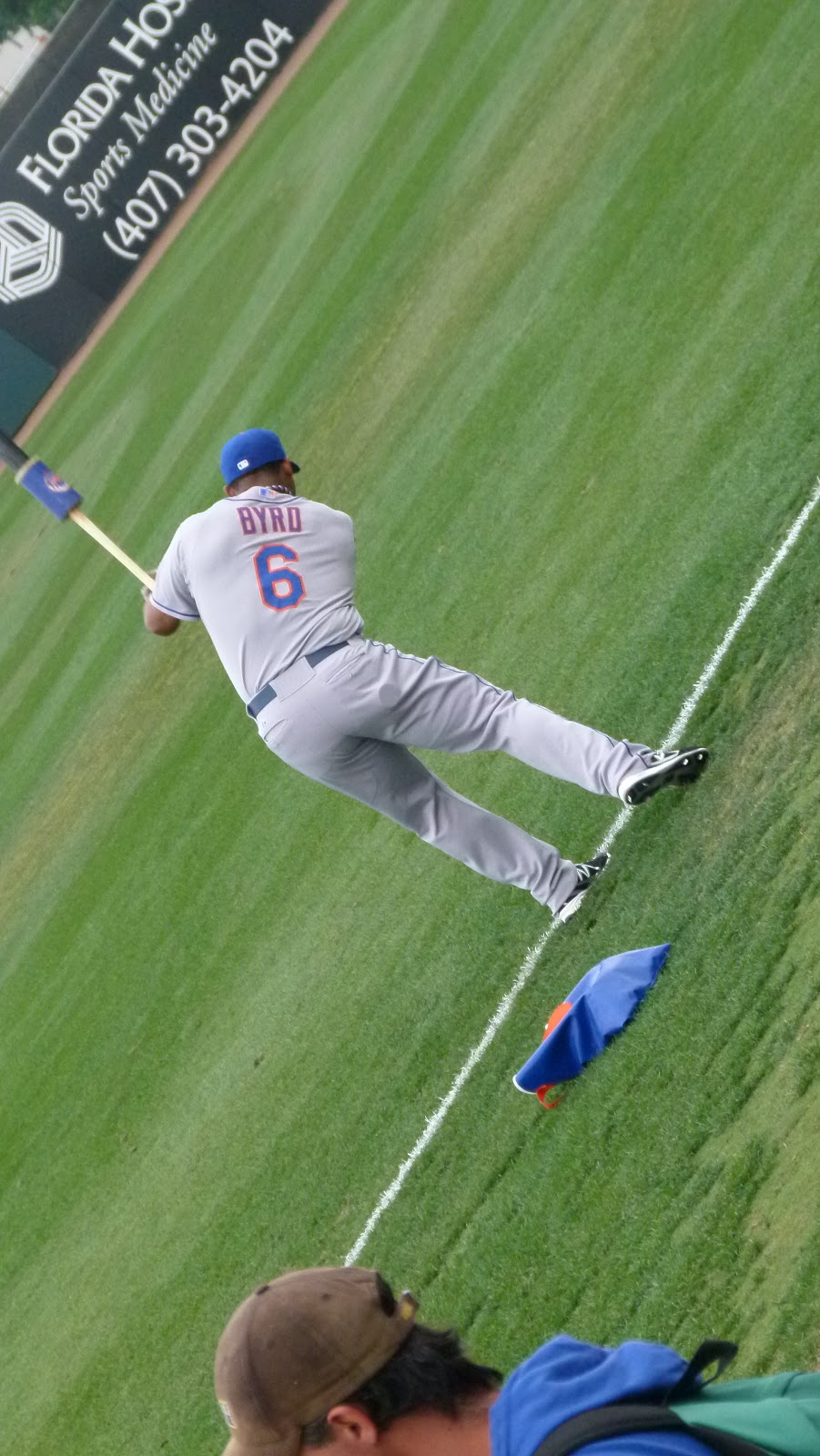 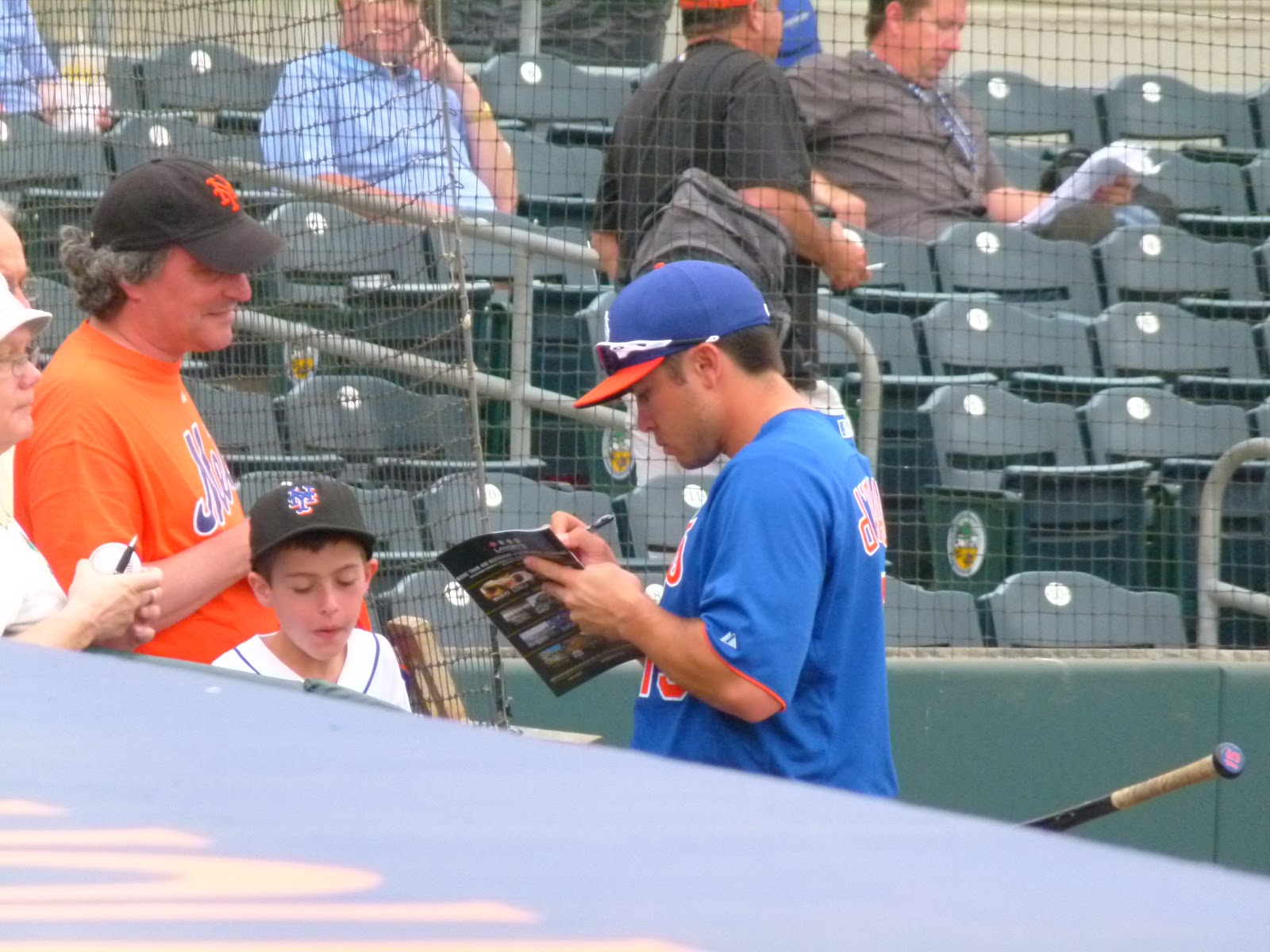 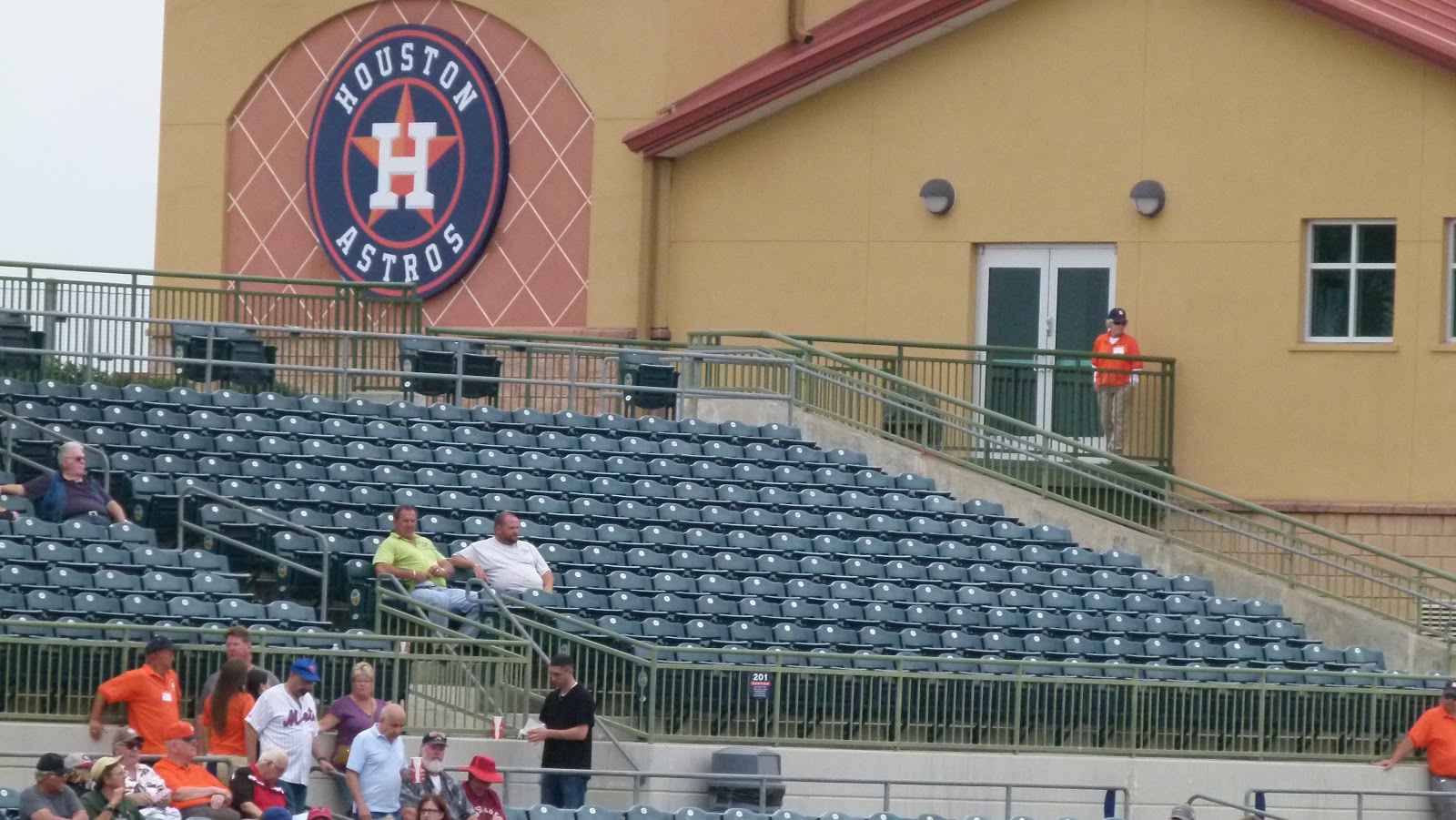 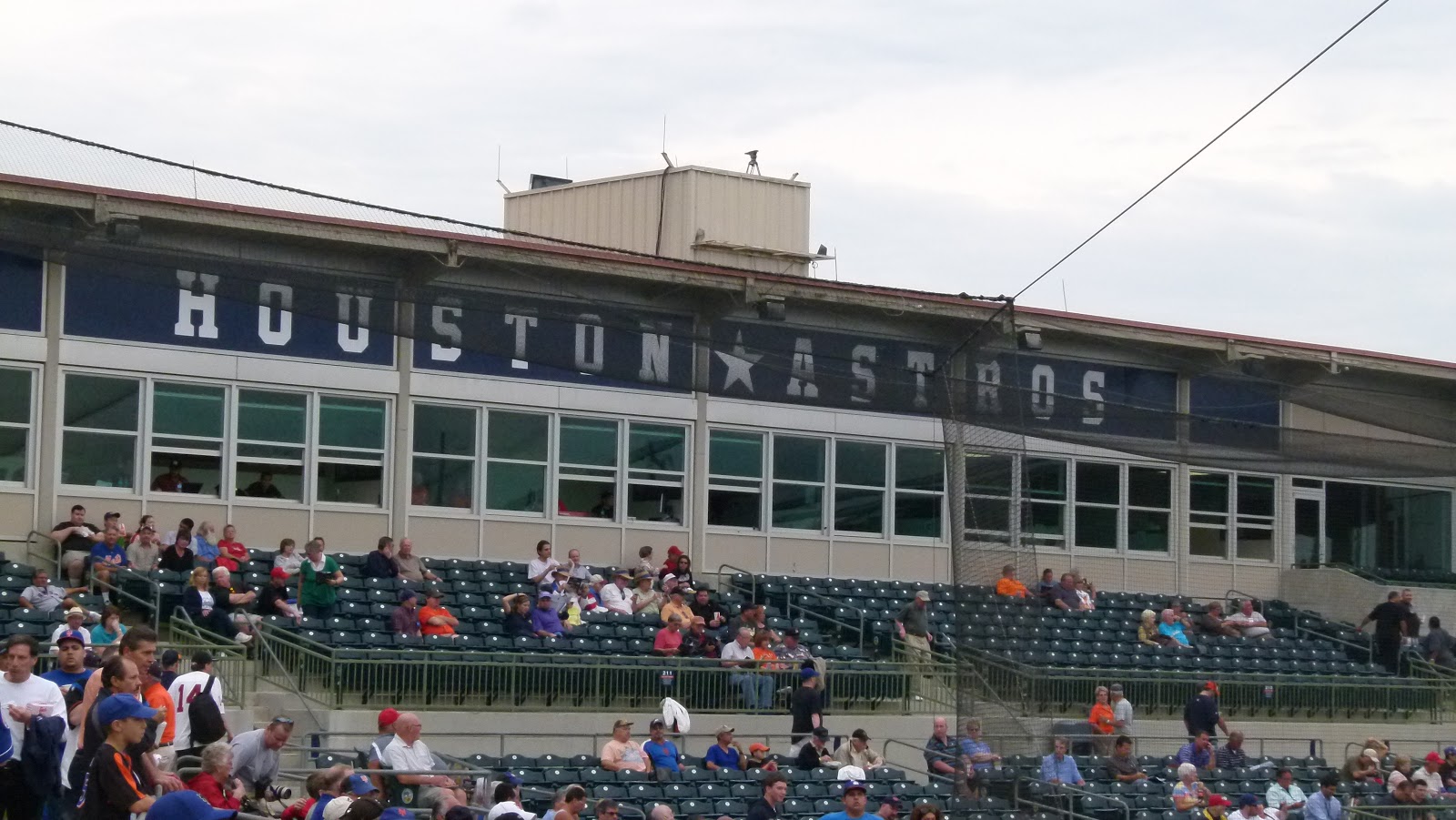 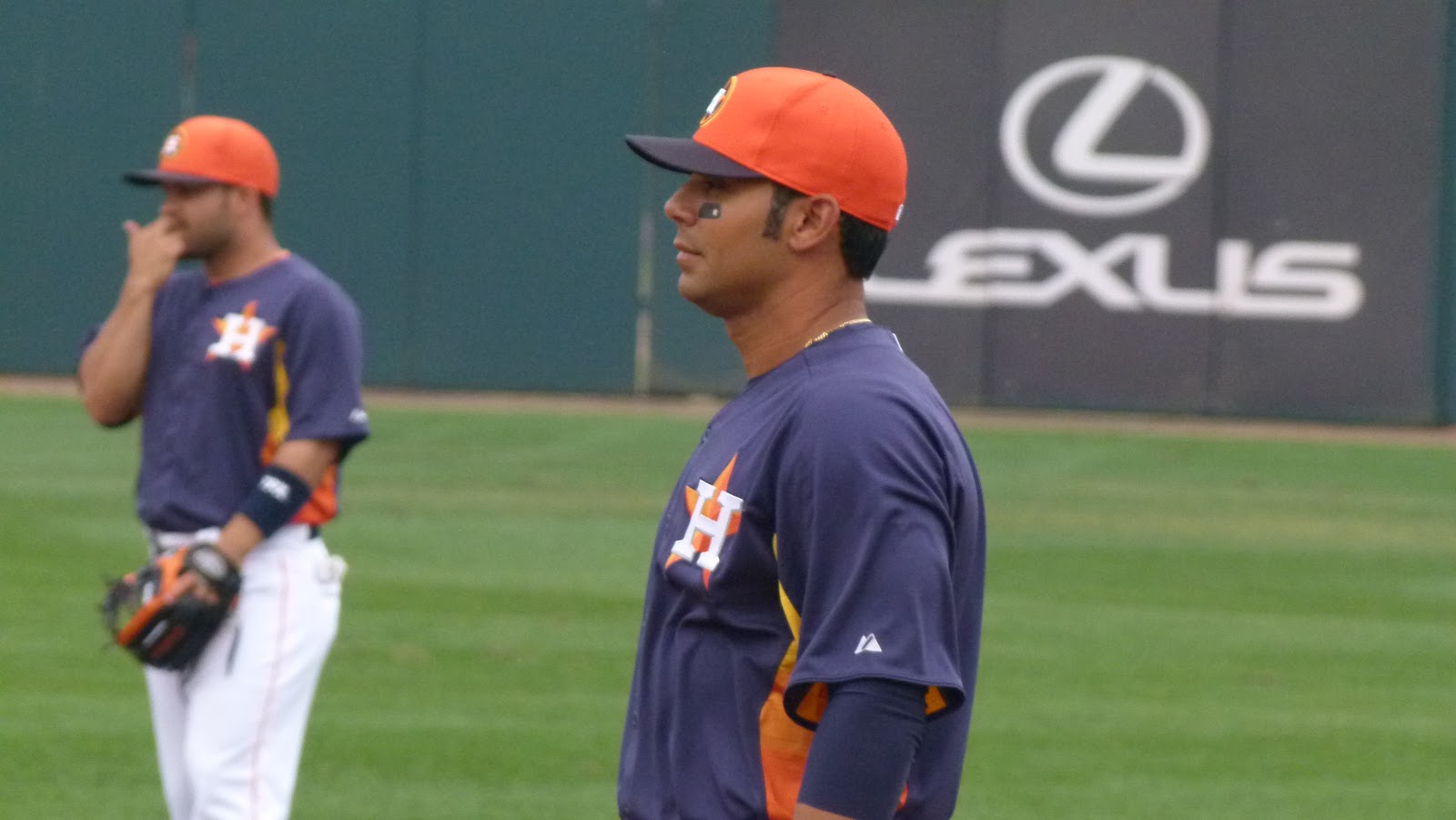 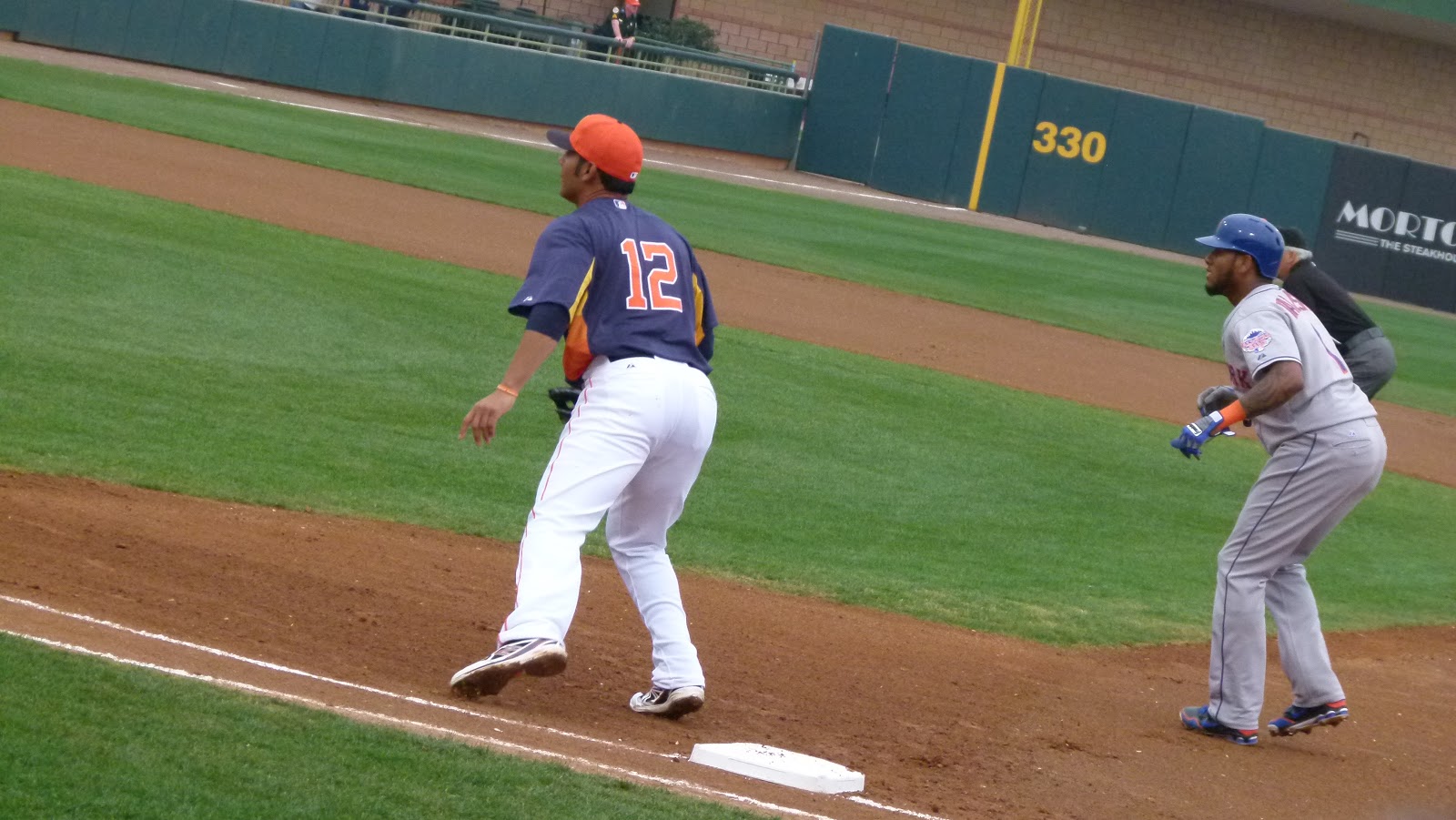 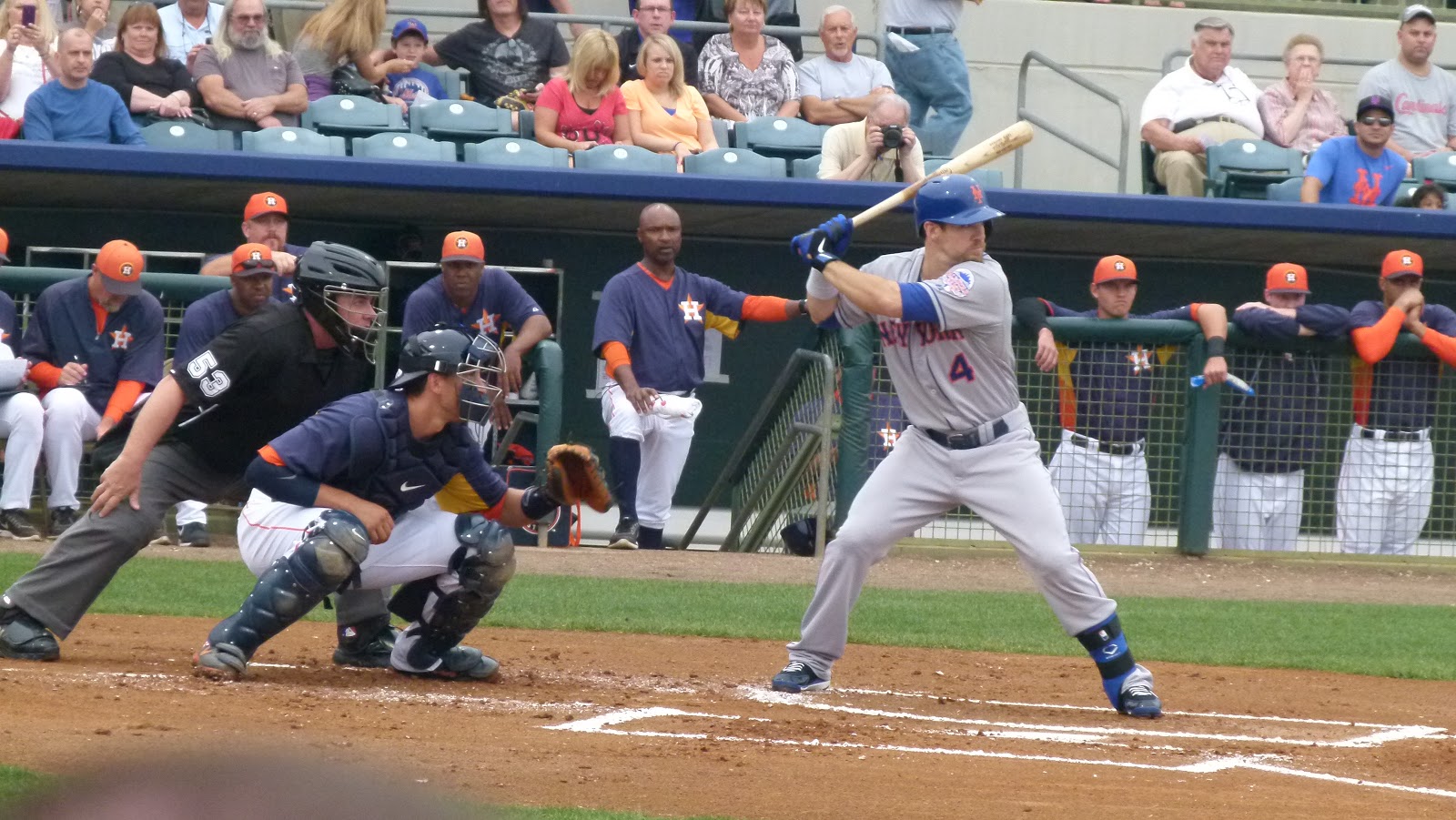 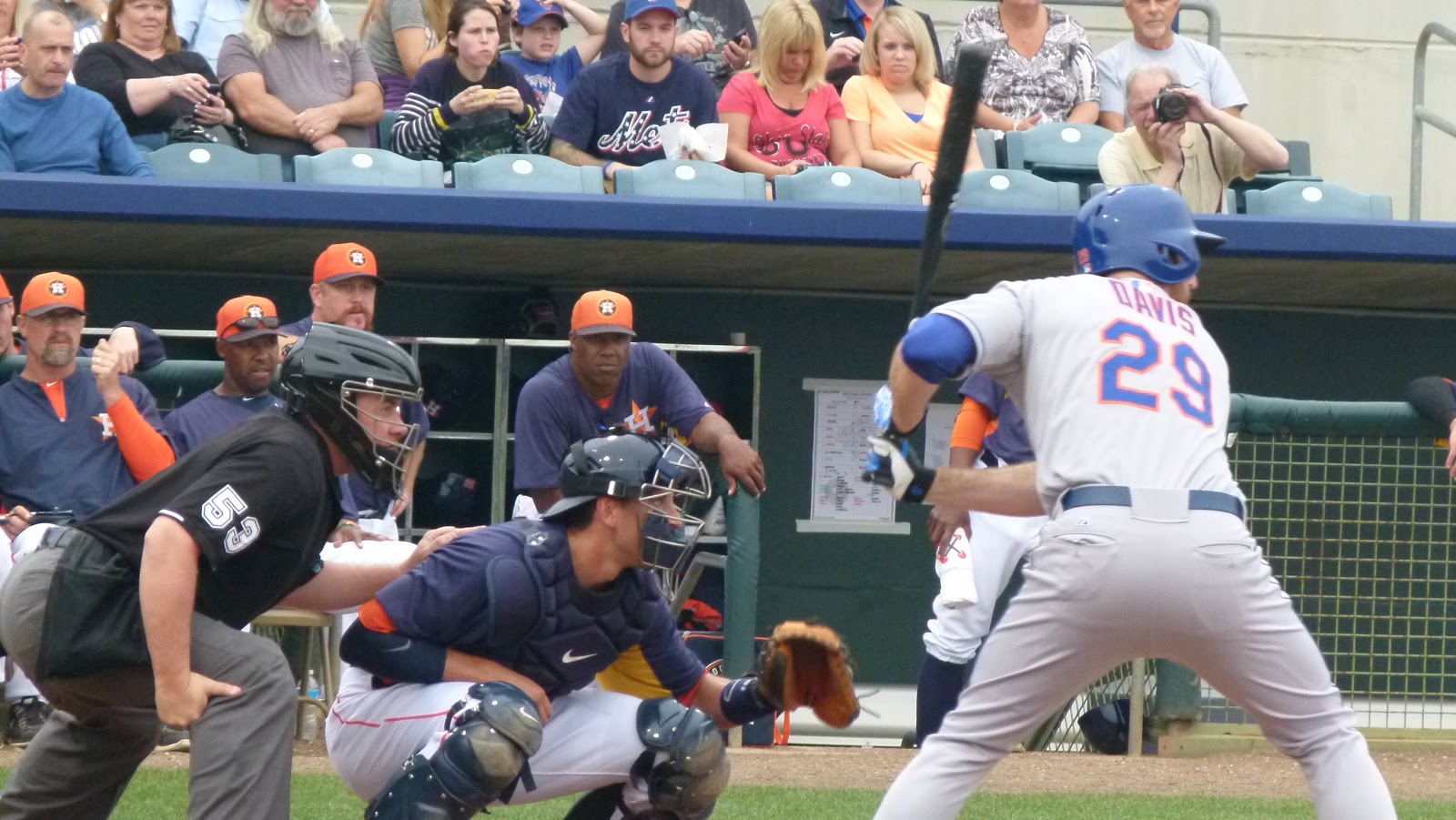 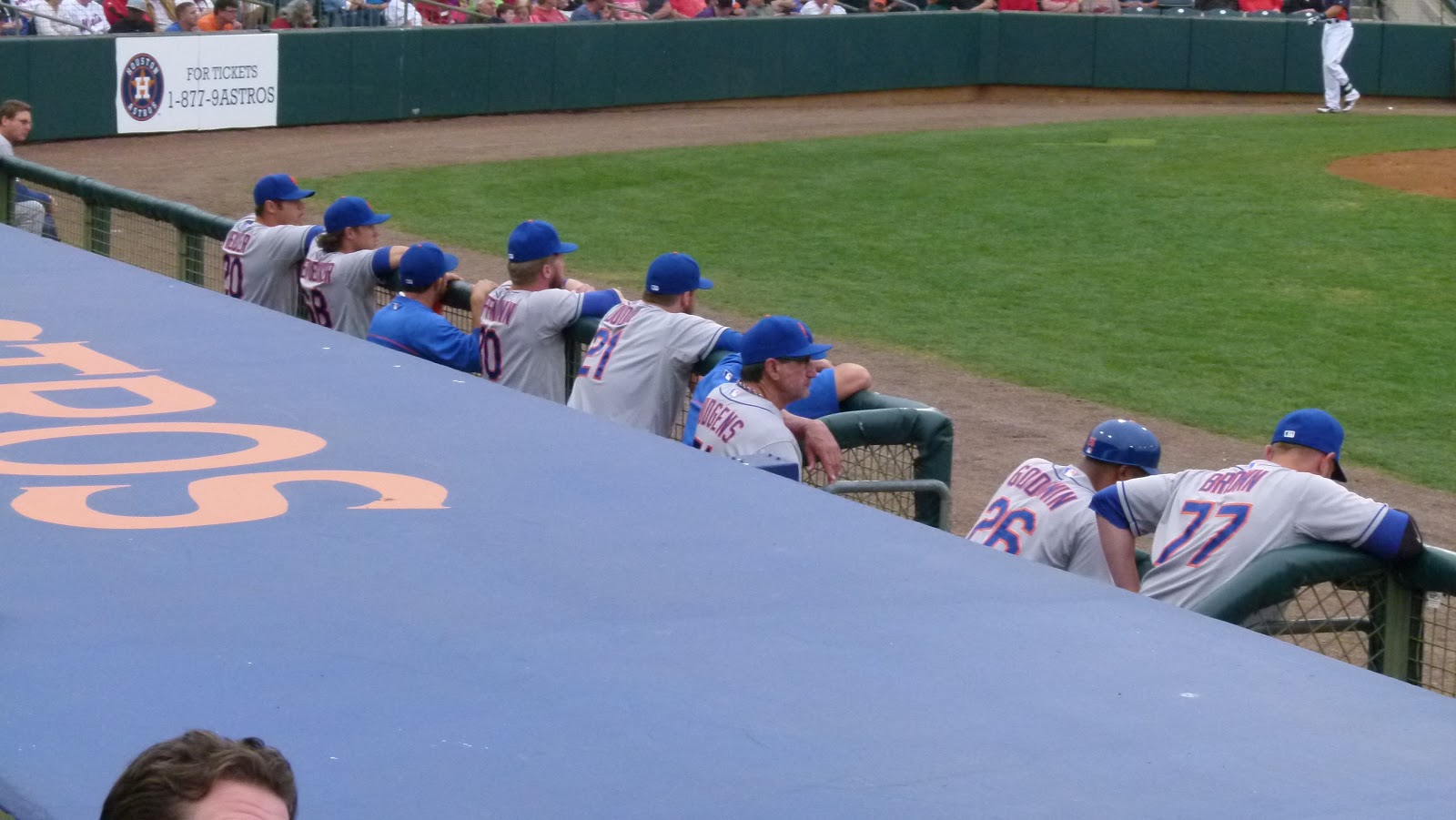 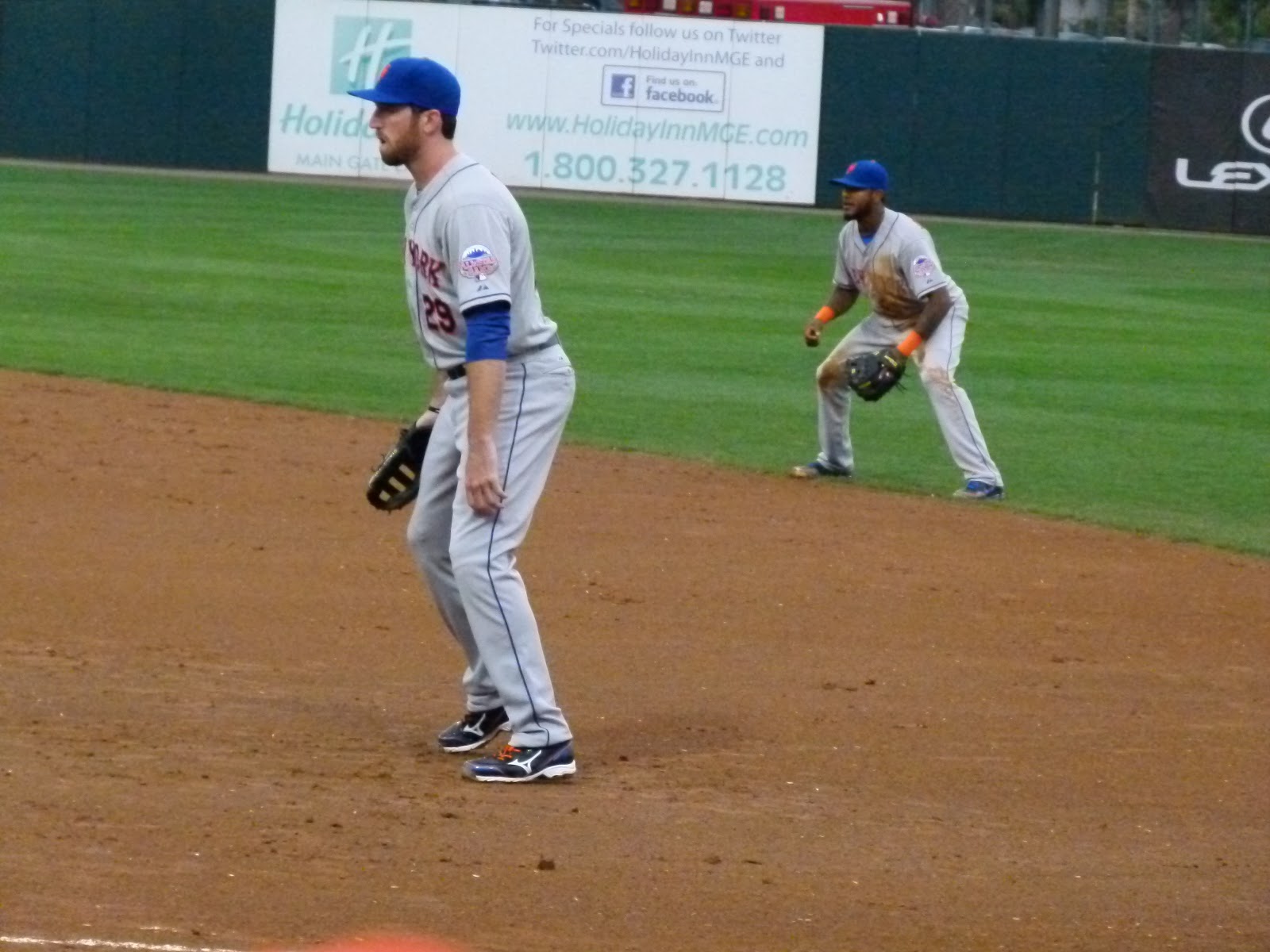 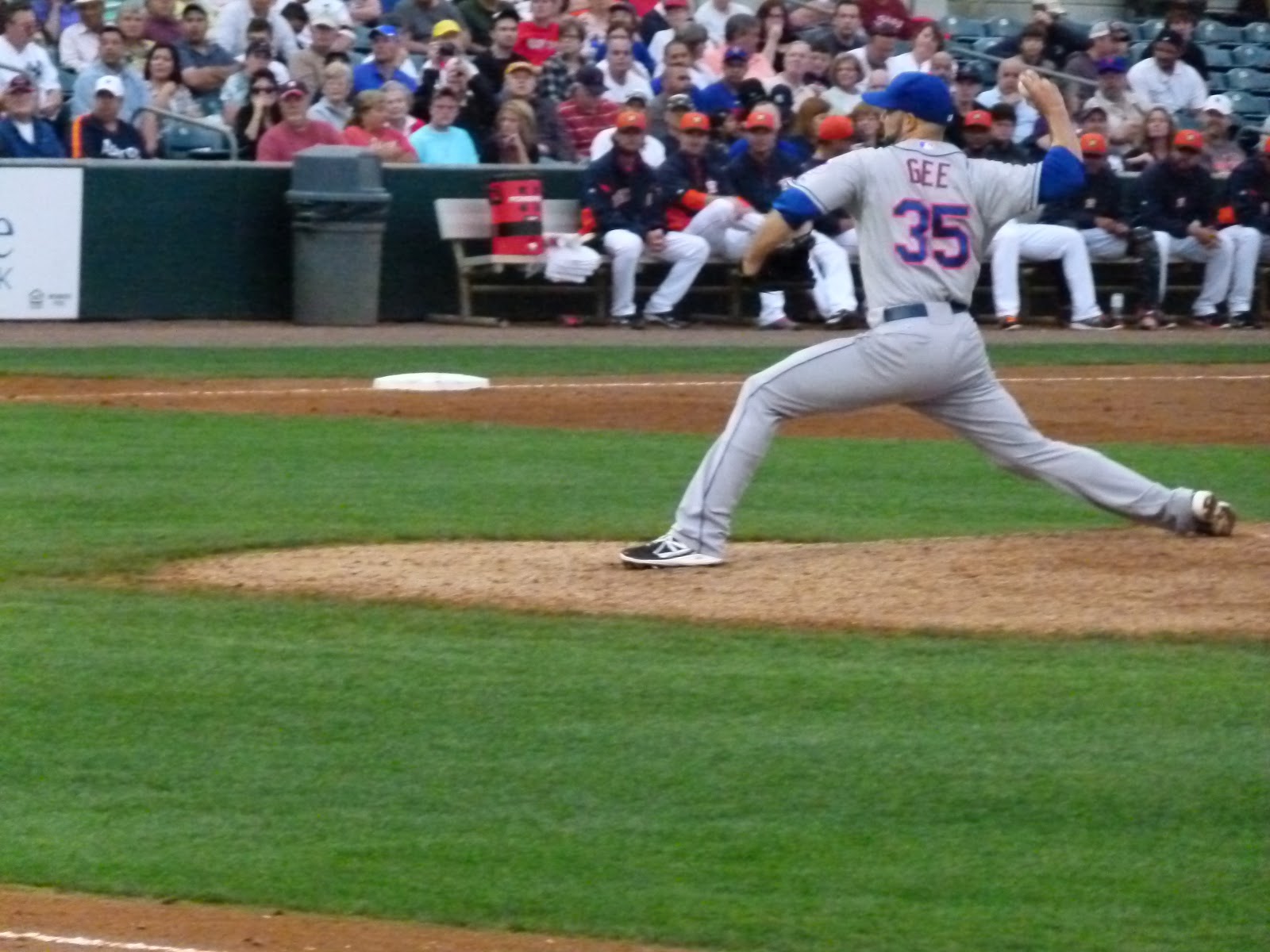 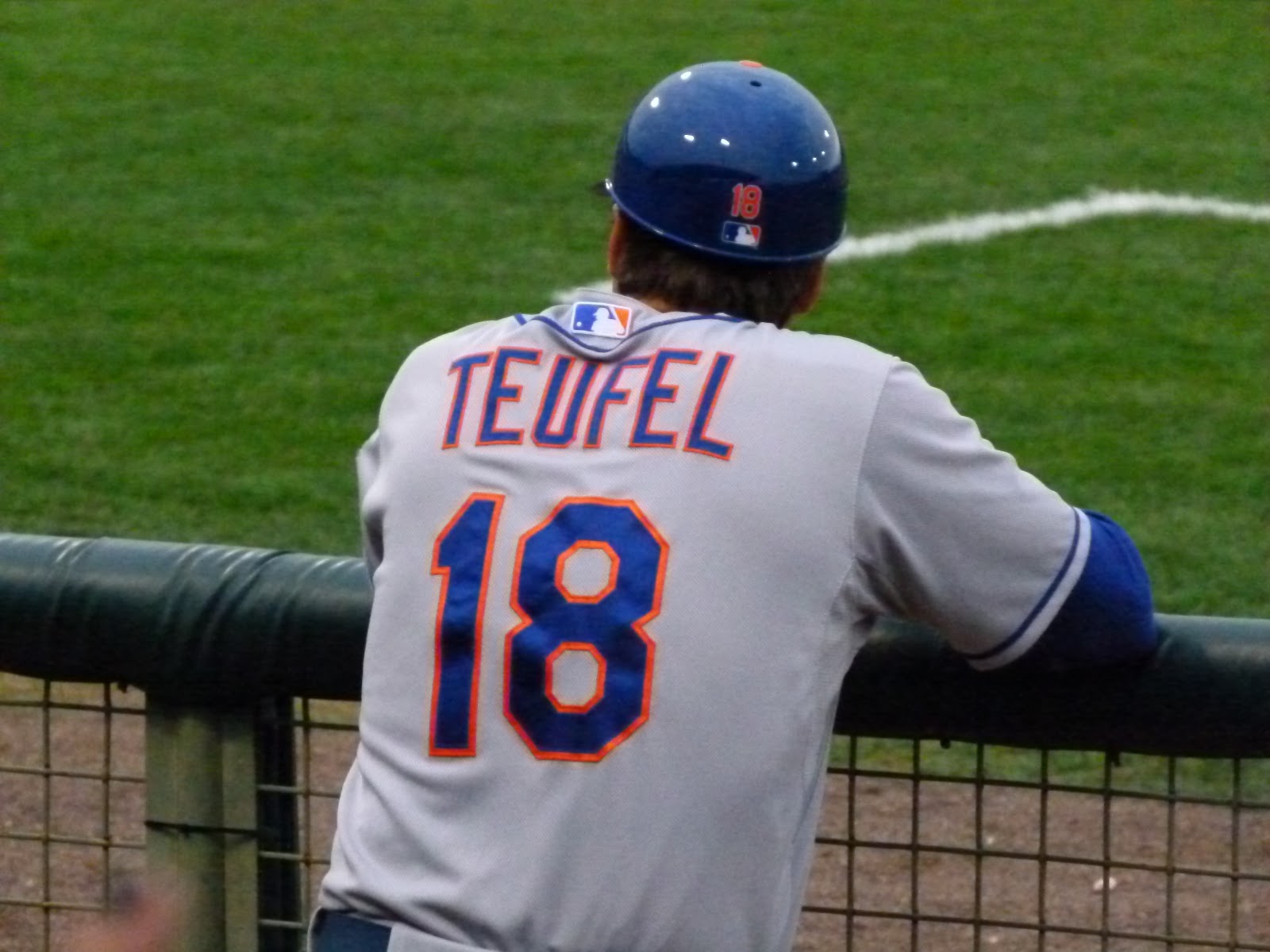 Getting ready for a mini-spring training trip. I say "mini" because in the past I would go for 8 full days and catch nine games. But, moving back to Tampa has changed that. Here is my itinerary for next week's trip.

That's it. Five days, five games. Counting last week's trip to Clearwater to see the Rays take on the Phillies and the Rays final Spring Training game at the Trop, that will be seven Spring Training games for 2013. I will post photos and updates as the week goes on. I do need to get the truck into the shop before I go to get the A/C checked out before I leave or it is going to be a miserable trip. The weather is mild this week, but I know that as soon as next week rolls around it will be hot.
Posted by nymetsfan at 10:44 AM No comments:

I haven't posted since late 2009? Oh, where does the time go? So much has happened to me and so much has happened to the baseball world. I'm not going to rehash the past. I just like to keep it in perspective. Anyway, I've already been to four Spring Training games. Here's the photographic evidence...
I also had a great seat at a night Rays @ Yankees game. The weather was incredible, the beer was cold and the ticket was free!!!! I was also able to check another Spring Training venue off my "been there list". I went to Ft. Myers to see the Rays take on the Minnesota Twins. I liked Hammond Stadium. They had some interesting food (carolina dog has pork and slaw on it, yum) and cheese curds (not for me). The place was packed. In fact, I believe every game I've been to this year was a sell out.
Now I'm remembering why I don't blog. I don't type well or fast. It takes me a long time to bang something like this out and it's not even remotely interesting. So, here's more pics....
Speaking of photos, I bought a great new camera. It's a Panasonic FZ100. It's got some great features for a camera that is essentially a point and shoot. Really, it's closer to a DSLR than a point 'n shoot. It shoots great photos and full HD video. Not that I shoot much video with it. I'll probably try some this weekend.
So that's all I got for now. I will try to make some entries while I'm out this weekend, I promise.
Posted by nymetsfan at 7:42 PM No comments:

I was given these two cards by one of the instructors I work with. He brought in a large stack of 1950's Bowman that he's had since he was a kid. I put them in penny sleeves for him. He let me pick two that I liked. I picked the Enos Slaughter, because it was a double. The other Enos was in much better condition. (I felt guilty enough taking these). I picked the Westrum from a small stack of Giants. The NY Giants were my dad's favorite team when he was growing up and Westrum was the manager for the Mets between Casey and Gil. It seemed like the right card.
There weren't any big stars in the group, nor would I have taken those. There was a Pesky, a Doby, Antonelli.... I advised him to take the cards to a card shop here in town if he was interested in selling them. They could tell him what they might be worth. But, he's decided to keep them because he just found out he's going to be a grand-dad. I like that much better.
The cards are not in great shape. But, I like them because right now they are the oldest cards I possess and because of the way I obtained them. I always think of Joe when I look at them.
Anyway, I share this because like the Mets this blog is limping into the end of the season.

The Good, the bad and the Ugly

I was going to post this last night, figuring the Mets would lose to the Braves. Lo and behold, the Mets scored a record high 8 runs in one inning and won the game. It was great. But, the Good, the Bad and the Great just didn't work. So I didn't post. 24 hours later the Mets haven't disappointed me. They are losing to the Braves 14-2 right now. So, here it is...the good, the bad and the ugly.
The Good

A package from Joe at i am the average joe. He contacted me out of the blue a week ago and sent me a link to the cake he made for opening day. It was a reference to the cake my wife made me for my birthday. Anyway, Joe buzz sawed my 2008 U&H & Series wants to a sliver of the cards I needed. Joe's a Met fan so I'm sure he's feeling as bad as I do about the Mets season. Joe I have a package on the way. Many thanks...

The Bad
The NY Mets Line-Up
Angel Pagan
Luis Castillo
Gary Sheffield
Daniel Murphy
Jeff Francoeur
Fernando Tatis
Omir Santos
Anderson Hernandez
This is not a Major League line-up. They are pieces to a team, bench players, AAA-players and trade fillers (I'm looking at you Anderson.
I really like D. Murphy at first, but he has to be surrounded by a strong team with good defensive skills. Francoeur has always impressed me with his arm in right field. I always thought the Braves should fire a cannon shot when he throws, now the Mets should do it. It would upset the runner coming into homeplate.
As for the rest of the team. If they aren't around next year, I won't miss'em. Tatis is 1-30 with two outs and runners in scoring position. Come on. Sheffield needs to be a DH in the AL or in old folks home. Don't get me started on Castillo or Pagan. Santos is a back up catcher.
The Ugly
Braves and Mets August 19th
15-2, final
Ouch
Posted by nymetsfan at 9:19 PM 1 comment:

They say it's your birthday....

Yesterday was my birthday. How old am I? 42. What a non-significant number. But, a number of good things did happen to me on my birthday. Not big things. Just nice.
1) I got birthday cards from family members
2) My wife got the oil changed in my truck (I hate doing stuff like that) while she was out getting stuff to make me a birthday cake
3) a birthday cake shaped like a baseball

4) Watched the 1976 All-Star Game on mlbtv.
5) Had dinner at a great pizza place in N. Charleston (evo pizza)
6) Mets beat Astros 9-3 (really nine to one but K-Rod gave up a two run homer in the ninth. He hasn't had many save opportunities lately and is probably rusty)
7) Night Owl sent me a HUGE stack of 09 topps and some other Mets. Thanks Greg!
So, let's see what Greg sent, shall we?
41-2009 Topps Series 2 base cards from my want list. That's one card for each year I have successfully navigated :) With those cards (and a few I picked up at Target) that cuts my Series 2 want list in half.
Very thoughtful, Greg. Thank you.
Here is the other random Mets goodness.
A 2009 UD Johan Santana. Great photography.

A 1986 Topps Doug Sisk. The only card in the bunch that I already had. A reminder of
happier days for the Metropolitans.

Willie Randolph, Dave Gallagher. Did you know that both of these guys were born in NJ? Matter of fact, so was I. 42 years ago.

Dave Magadan. He was born in Tampa, FL. I already knew that. I spent my formative years in St. Petersburg, FL. That's right across Tampa Bay from Tampa. St. Pete is where the Rays play. NOT IN TAMPA. Sorry, I'm getting cranky in my old age. Magadan is the hitting coach for the Rays rival Red Sox. I saw him in the dug out at the playoff game last year, but was too far to get a photo.

Carl Everett was also born and raised in Tampa. I didn't know that. Carl now plays for the Newark Bears. He didn't play for the Mets for very long. There's a nice post about Carl on Paul's Random Stuff blog. I hope he doesn't mind me linking to it. (Paul, I mean, not Carl).

I will spend the rest of the weekend sorting and counting and collating and wondering what the
next 42 years will bring.
Posted by nymetsfan at 8:54 AM 1 comment:

I haven't posted in over two weeks. If you're a Mets fan, you'll understand. So, why am I posting on the day that brings disturbing news about a member of the Mets front office staff and another pathetic performance against one of the worst teams in baseball? Because my friend at Nightowl cards emailed to inquire about my 2009 Topps Series 2 needs. I sat down and did a survey of what I had and what I needed (as I watched another Mets loss).
The quick answer is; I need more than I thought.
The long answer is at this link.
Thanks to Greg.
BTW, Let's hope the Dodgers can keep on winning. I couldn't stand another season of the Phillies (or the Braves) in the WS.
Posted by nymetsfan at 10:08 PM 1 comment:

nymetsfan
Tampa, Florida, United States
I'm an avid baseball fan. This is a very messy collection of pics and stories about the games I've attended. It is completely out of order. Hopefully, over time it will take some shape. But, since it represents me, it will probably stay a mess. Veering from one topic to another, rambling, and jumping on soap boxes. I have included stories about the Spring Training games of the past few years, other games I've attended, and finally my new hobby of collecting baseball cards.

Cards for Trade, Cards I Need

People who do this blog thing much better